We examined stream communities using molecular and morphological methods from six mountains across Asia and Europe. We characterised community uniqueness with local contributions to beta diversity (LCBD), and investigated the drivers of its geographic patterns using Mid-Domain Effect (MDE), coenocline simulation, Raup-Crick null model approach, and through comparisons to environmental factors. MDE is a stochastic model by considering species elevational range, while coenocline simulation is a deterministic model by considering species niche optima and tolerance. The null model provides possible underlying mechanisms of community assembly with the degree to which deterministic processes create communities deviating from those of null expectations.

Across all taxa, we revealed a general U-shaped LCBD-elevation relationship, suggesting higher uniqueness of community composition at both elevational ends. This pattern was confirmed and could be explained by both stochastic and deterministic models, that is, MDE and coenocline simulation, respectively, and was supported by the dominance of species replacement. Temperature was the main environmental factor underlying elevational patterns in LCBD. The generalists with broad niche breadths were key in maintaining community uniqueness, and the higher relative importance of deterministic processes resulted in stronger U-shaped patterns regardless of taxonomic group. Our synthesis across both mountains and taxonomic groups clearly shows that there are consistent elevational patterns in LCBD among taxonomic groups, and that these patterns are explained by similar ecological mechanisms, producing a more complete picture for understanding and bridging the spatial variation in biodiversity under changing climate.

These findings were just published in Global Ecology and Biogeography with a Cover Image of the stream picture on Jade Dragan Snow Mountain. 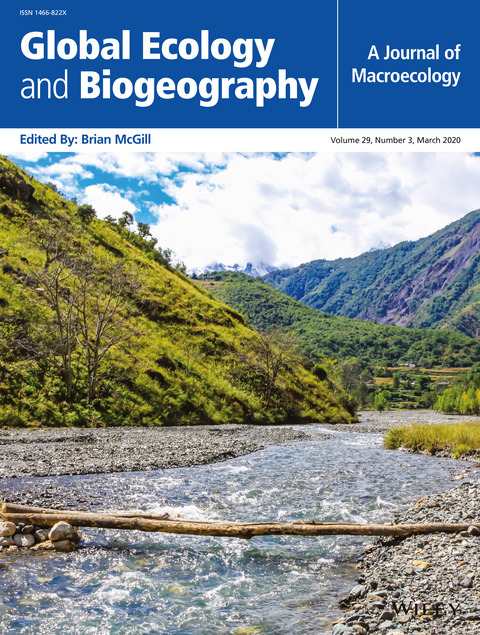